Why we "let" our son buy his bike 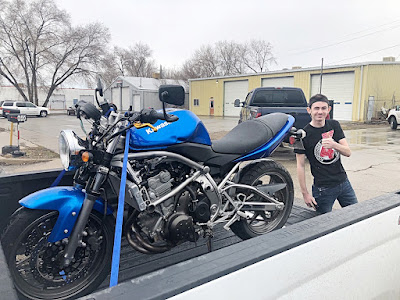 I've heard it all.  "Doesn't it scare you"?, "Oh, NO WAY"!, "Not why they are under my roof"!  Yep, you bet I thought each an every one of these when Aidan first started talking motorcycles and how he wanted one.  I even had a few more run through my head, and sent a few articles to him to read about accidents.   I've truly never dreaded anything more in my entire life.

We spend months, if we are blessed to, growing their sweet little bodies or we spend months preparing for them and how we are going to keep them alive once they are ours.  We spend dollar after dollar preparing to baby proof our home, buy all things necessary to raise a baby and toddler and learn everything we need to to keep them out of harms way.  We hold their hand when they cross the street, we teach them not to talk to strangers, we buy the best car seats.  Of course we don't want our child to do anything to put themselves in danger!  I mean would I put my baby on the back of a motorcycle?  Of course not!!

Aidan has always been my kids who's bucked the reigns.  He's never gone nuts and gotten himself into danger or tried things that would've been harmful. He's always just gone his own direction and beat to his own drum.  If anything, I could say, the more I'd tell him he shouldn't do something the more curious he'd become.  He usually decided on his own that I was right but wouldn't just take my word for it.  Why can't kids just do what they're told??  Ha, ha.  It seems we are raising little humans who are actually their own people and not just little clones of us.  Who'd of thought?

While he's always been the kid with his own ideas on things, he's also never been anywhere close to reckless or dumb.  He has always been so analytical about everything.  Knowing how things worked, why things were the way they were, why he should or shouldn't be allowed to do something is always how his mind has worked.  By the time he even started talking about wanting to get a motorcycle license he'd been doing his research.  He'd looked up statistics, types of motorcycles, how to ride, what safety gear he needed and the costs of all it as well.


One thing about my Aidan, when he decides something, it's like it's become cemented it into his head.  It takes a stick of dynamite to blow it out.  I remember being in a stand off many mornings with a young Aidan about whether he was going to get out of the top bunk of his bed and go to school.  No amount of threatening, cajoling, promising, or yelling would get him down.  He'd literally spend ALL day in his bed knowing that if he didn't go I wasn't going to let him out until school was over.  I used to think he was the most stubborn kid, now I know him well enough to know that when he believes something he takes the time to figure it out for himself and it's just hard to get him to change his mind.

He's worked since the month before his 15th birthday.  Non-stop.  He has a strong work ethic and helps out around the house when we need it.  He watches his siblings, he helps his family, he helps with maintenance around our house and he has saved and saved and saved.  He had enough to pay cash plus the enormous cost for all his gear.


His dad and I had two choices.  We could say, "No way!"  We could have used the, "you live in our house", route and said no.  He was only seventeen at the time so we could've just told him no.  Or, we could open a dialog and find out what he was thinking.  Taking this route allowed us to discuss safety, cost, rules and because we chose not to alienate my son, we had his respect to follow them.  We've never been the parents that just say NO, we welcome discussion.

In talking to him I discovered he'd researched the best possible safety gear, how to ride, and accident statistics.  He rides with a body armor jacket, and gloves, and a helmet (which would've been a hard, NO, for me if he refused but he's not that dumb.)  I know that no amount of gear or defensively driving can protect him from everything, that if something were to happen the outcome wouldn't necessarily be a good one, but life comes with no guarantees as it is. 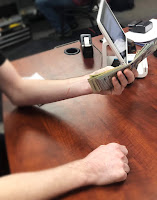 John decided to use this opportunity as a way to bond and decided to take their motorcycle test together.  The one on one time allowed him to open the dialog and discussion about safety and riding and hear Aidan's side of things.  We taught him to ride like he was invisible, to slow at each intersection like the other people on the road weren't going to stop and to be defensive.  John took him and watched as he handed over his hard earned cash and helped bring the bike home.

We made the choice as parents to be involved in his decision to set boundaries, rules, make sure he had all the safety gear and took his time learning to ride within those boundaries.  He wasn't allowed on the freeway for months.  Personally, I still hate it!  His assurances of accidents being more likely in stop and go traffic do not make me feel better about it.

He was only 3 months of his 18th birthday.  Things could've gone completely different.  Alienating him at that point would only have pushed him to buying a bike on his own as soon as he was 18.  He would've still ended up the owner of a motorcycle with us parents have no say in anything.  All that would've succeeding in doing was to push our son away and teach him that when he has an issue pop up in his life we might not like, that we wouldn't be a safe avenue to open up to.  That is not an option for me!  I've made it more than clear we will always be here to help them even when we might not love the situation they fin themselves in.

Does my heart skip a beat every time I see him on his bike?  Yep.  Do I feel like I just strapped my baby to the back of motorcycle in a car seat?  Mmmhmm.  Do I stalk him on Life 360 app when he's gone...I sure do.  And you can bet, I've been nonstop bugging him to get himself a pair of body armor pants to wear along with his jacket.

No matter the situation letting our kids go is hard.  Letting them walk away from us and live their life is hard.  It's goes against the grain as a  parent to let them forge their own path in any circumstance when we've spent all their life protecting them. Eventually however, we have to trust that what we've taught them is enough.  We need to have faith in their ability to make good strong choices. I will always be around for anything they need me for but at some point we have to let them live their own life and make their own decisions.  It's just never easy on us parent's no matter what, but it sure is rewarding to watch all our hard work come to fruition.

We chose our son. 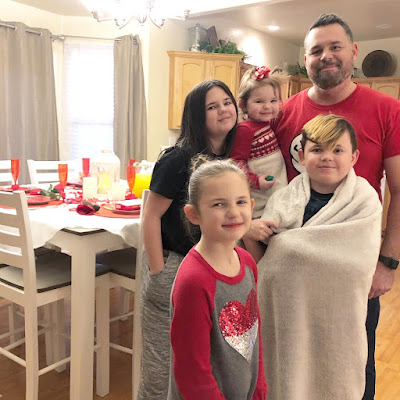